Piarolling is an Internet meme[1] involving the elimination of American Idol season 10 finalist Pia Toscano that aired on April 7, 2011. The meme is prominently featured during an episode of American version of the popular yet controversial web site Vote for the Girls which is used in a a painful elimination or when a moderator's pick (typically a fan favorite) is eliminated, leading to either Toscano's elimination or the music video of This Time. People led to the elimination or music video are said to have been piarolled. Piarolling has extended beyond Toscano's elimination to playing the video or Toscano's single This Time in other situations, including other eliminations, such as a live appearance of Toscano herself performing This Time on the web site's make-up So You Think You Can Dance competition in the summer of 2011.[1] The meme eventually lead to Vote for the Girls webmaster Ava Zinn herself audition for the eleventh season of American Idol and helped overtake then-competing web site Vote for the Worst. 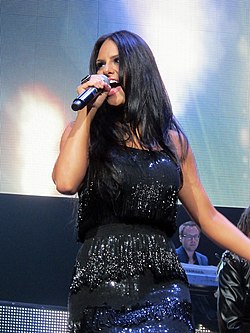 Piarolling is named after Pia Toscano, a supported Vote for the Girls pick on American Idol season 10.

Toscano auditioned for the tenth season of American Idol in East Rutherford, New Jersey, and was put through to Hollywood, this time making it through to the Top 24. Toscano auditioned for Idol four times before. She made it through to Hollywood in season 6, but got cut during the first day of Hollywood. Toscano placed ninth on the tenth season of American Idol. She was considered a frontrunner in the competition, and her elimination shocked judges Randy Jackson, Jennifer Lopez, and Steven Tyler, all of whom were visibly and vocally upset.[2][3] Some viewers and media outlets described Toscano's departure as one of the most shocking eliminations in American Idol history.[4][5]

Piaolling is said to have begun as a variant of Rickrolling, an Internet meme[6] involving the music video for the 1987 Rick Astley song "Never Gonna Give You Up". The meme is a bait and switch; a person provides a hyperlink which is seemingly relevant to the topic at hand, but actually leads to Astley's video.

The first known instance of a piaroll occurred in July 2011 when Ava Zinn, who was vocal of Toscano, and auditioned for the following season in Pittsburgh after losing a friendly wager upon Toscano's elimination. Piarolling has extended beyond web links to playing the video or song disruptively in other situations. The meme as well as Zinn's American Idol Audition helped the Vote for the Girls web site and competed against Vote for the Worst.

On July 5, 2011, it was announced that Toscano had officially signed with Interscope Records. Her debut single titled "This Time" premiered July 11 and was released digitally on July 13.[7] Toscano performed the single on So You Think You Can Dance on August 4, Good Morning America on August 12, and Live with Regis and Kelly on August 16. A year later on September 4, 2012, Toscano parted ways with Interscope Records and 19 Management and her debut album that she recorded would not be released. Toscano remains signed to RedLight Management and recently signed with Underdog Entertainment, where she is recording a new album.[8]

Effects on Toscano and reaction[edit]